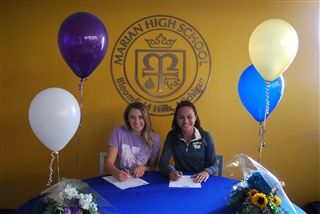 11/11/2016
Two Marian High School seniors made college commitments. Sophia Schott and Kailyn Swantek signed national letters of intent to swim in college. Sophia signed with Northwestern University, and Kailyn signed with the University of Pittsburgh.
Sophia, daughter of Mary Ann and Bob Schott of Bloomfield Hills, will join the Northwestern University swim team next year. An All-State and All-American swimmer, Sophia is a member of Marian’s Ambassador Club, SADD, and a tutor at Detroit Achievement Academy. She is a two time state champion in the 50-yard freestyle, and was a member of Marian’s 2014 State Champion swim team.
“My Marian swim coach taught me how to be a better overall person, and the value of commitment and hard work in and out of the pool,” said Sophia.
Kailyn, daughter of Kathleen Swantek of Birmingham, is looking forward to swimming and studying health sciences at the University of Pittsburgh next fall. Kailyn is an All-State and All-American swimmer, and was a member of Marian’s 2014 State Champion swim team. She is a lifeguard at Cranbrook Swim Club, a volunteer with Angels’ Place and International Samaritan, and the captain of Marian’s swim team.
Back