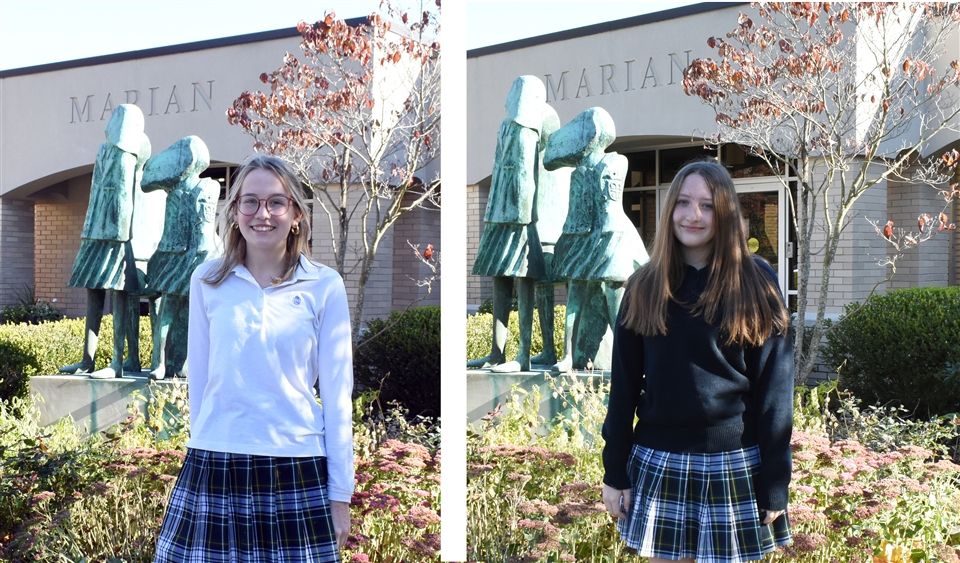 11/17/2020
Marian High School seniors, Sara Foret '21 and Erin Hannigan '21, have been named Commended Students in the 2021 National Merit Scholarship Program based on their scores on the 2019 Preliminary SAT/National Merit Scholarship Test (PSAT/NMSQT). Sara and Erin are part of the 34,000 commended students throughout the nation who are recognized for their exceptional academic promise. Some of these students become candidates for Special Scholarships sponsored by corporations and businesses. Commended Honorees placed among the top 50,000 scorers of the more than 1.5 million students that entered the competition.
Erin, daughter of Debby and Jeff Hannigan of Birmingham has been active in sports, academics, and clubs at Marian. She was selected for the Archdiocese of Detroit All-Catholic Academic Teams for 2017, 2018, 2019, and 2020. She plays on the varsity lacrosse team and in her sophomore year was captain of the junior varsity lacrosse team. As a freshman, she was on the junior varsity golf team. Erin is a member of the National Honor Society, Spanish Honor Society, and National Art Honor Society. Erin was her class’s president for three years and has chaired numerous events. She has received first honors on Marian’s honor rolls every semester and has received certificates of service, leadership, and class spirit awards. Erin gives back as a Sunday school teacher at Holy Name. She is also an ambassador club member.
Sara, daughter of Amy and Scott Foret of Beverly Hills is a member of the National Honor Society, Spanish Honor Society, and International Samaritan. She has been on the Detroit All-Catholic Academic Teams for 2017, 2018, 2019, and 2020; and earned gold and bronze medals in the National Spanish Exams. At Marian she is a member of the Ambassador Club, and the Marian Rice Players. She has also earned superior ratings in the Gilmore Piano festival for the last six years.
Back