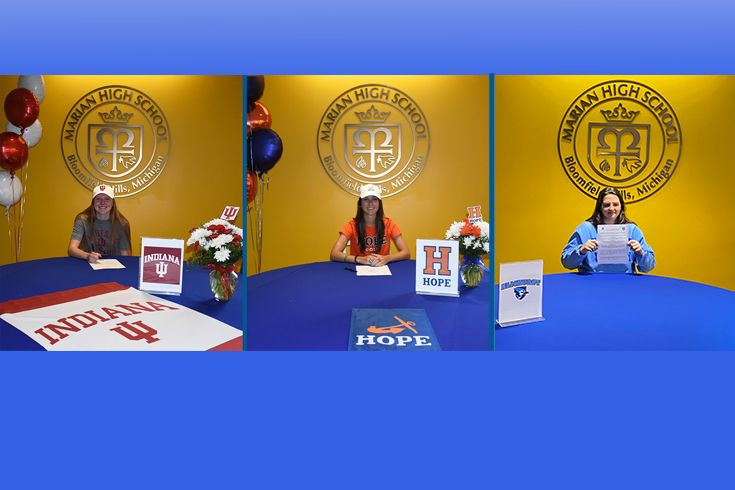 5/25/2021
Three Marian High School seniors recently signed national letters of intent to play their sports at colleges this fall. Lauren Sass will play golf at Hope College, Ainslie Vanneste will row at Indiana University, and Eliana Delusky will play lacrosse at Elmhurst University.
Lauren, daughter of Aimee and David Sass of Bloomfield, has accepted an offer to join Hope College’s golf team this fall. She said that she chose Hope because, “I wanted a Christian community that would help support me and prepare me for graduate studies and the workplace. I was also very drawn to the athletic program that focuses so strongly on the student-athlete. I love the location of Holland, and how close it is to Lake Michigan.” No decision yet on what her field of study will be but she is leaning towards the business school.

While at Marian, Lauren’s golf talent has earned her numerous athletic honors. During her four years on the Marian varsity golf team, the team placed second in the Michigan High School Athletic Association (MHSAA) Finals for Division 2 in 2017, won MHSAA Finals for Division 3 in 2019, won Regionals for four years in a row (2017-2020), and won Catholic leagues in 2019 (she placed fourth individually). Lauren was team captain for her junior and senior years. She has played in the top five on her team since freshman year, was All-Catholic in 2019, and won several additional awards, including Most Improved in 2017, Scholar Athlete in 2018, Sportsmanship award and Coaches award (for leadership and performance).  Outside of sports Lauren has earned membership in the National, Spanish and Art Honor Societies, Marian’s Ambassador Club and also a silver medal in the AATSP National Spanish Exam. She has earned High Honors Achievement Awards for all four years at Marian.
Outside of Marian’s golf program, Lauren competed in golf competitions such as Golf Association of Michigan and Callaway tour events.  Lauren also actively volunteers for Humble Design and Suite Dreams.

Ainslie, daughter of Stephanie and Christopher Vanneste of Macomb, has accepted an offer to join Indiana University’s rowing team this fall. Ainslie was on Marian’s figure skating team her freshman year and also participated in club skating in the Onyx Suburban Skating Club. While at Marian she was on the cross country and ski teams in ninth and tenth grades. Ainslie received an art scholarship in her freshman year and is a member of the National Honor Society, the Ambassador Club, and also served on the honor code committee.

As a freshman at Marian, Ainslie earned varsity letters in four sports: cross country, track, figure skating and alpine skiing.  She has been skiing and competing in figure skating from the age of four, and has always loved to compete. She focused her upper-class years on cross country and track enjoying the team bond created from long runs and interval work-running is very special to her. The dedication that she showed to her sports earned her the honor of being named team captain of her four sports by four different coaches!

Eliana Delusky, daughter of Carmen Sarafa-Delusky and Christopher Delusky of West Bloomfield has commitment to play lacrosse at Elmhurst University. She was named lacrosse All-state and All-conference for 2019 and 2020. She plans on studying business at Elmhurst, with the hope of also going to culinary school in the near future. In addition to playing for the Mustangs, Eliana also did four years of travel lacrosse with the Detroit Coyotes.

Eliana’s mother is a Marian alumna, and after hearing about all the great things Marian offered to her, she is looking forward to the relationships that she made with her classmates becoming stronger as the years go on. Eliana said, “I am proud of the ideals that the school has on making us students more complete people. The focus on academics is a big part of it, but it’s this difference, making Marian students better people, that I will always cherish.  I was lucky enough to go to Guatemala on a mission trip in 2020 before the pandemic hit. It was an amazing experience serving with International Samaritan and working alongside a lot of girls from Marian who will remain my friends for life.”  She also participates in several food pantries every year that are sponsored by the Arab-American Chaldean Council, where meals and clothing are distributed throughout downtown Detroit. “It’s very humbling and I recommend anyone wanting to serve their community to get involved in this charity,” she suggests.