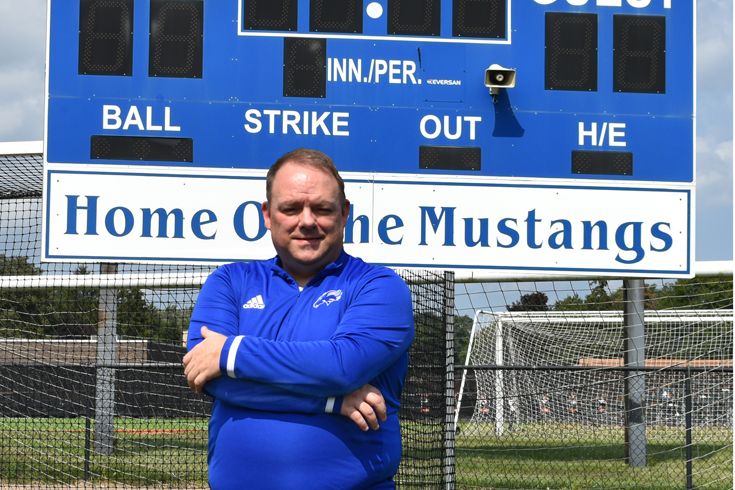 9/16/2021
Marian is pleased to introduce our new athletic director (AD), Mr. Michael Watson. Mike officially began his work with Marian on July 1 and kicked-off the 2021-22 school year at full speed. About six weeks into his new role, he had the opportunity to lead a socially distant, all-school assembly celebrating Marian’s 4-peat, 2020-21 State Champion soccer team, the first all-grades, in-person gathering of the school in 14 months.
Mike comes to Marian with many years of experience in the athletic administration field. Previously working at Ashley, Rochester, Oxford, and Warren De La Salle High Schools, and for Muskegon and Oscoda Public Schools prepared Mike for his role at Marian. He holds a Bachelor of Arts from University of Michigan and a Master of Science from Ohio University. He is also a certified master athletic administrator (CMAA) as designated by the National Interscholastic Athletic Administrator’s Association (NIAAA) and has earned “Masters Elite” status as part of the Michigan High School Athletic Association (MHSAA) Coaches Advancement Program (CAP). Watson continues to teach best practices in athletic administration to interscholastic coaches and administrators statewide and nationally through the CAP and NIAAA Leadership Training Institute.
In addition to his full schedule as athletic director, Mike enjoys time after work with his family. He has two daughters – Hope is a junior at Wayne State University and Holly is a junior at Regina High School. In addition, he is also a proud stepdad to Macie, Brennan, Cali, and Mylee McDevitt.
Mike is looking forward to putting a greater spotlight on Marian’s athletic powerhouse that currently includes 32 State Championship teams. Just some of his short-term plans are to grow Marian’s online presence and to expand the athletic department’s digital communication strategy. Long term plans include outdoor athletic facility improvements.
Mike is filling very big shoes with the passing of Dave Feldman, in January 2021, who had served as Marian’s AD since July 2004. “As I’ve told many, I’m very blessed to have the confidence of Sr. Lenore and be part of the Marian staff,” said Watson. “However, like everyone, I’m saddened at the circumstances with Dave’s passing. I look forward to honoring his legacy and the strong Marian tradition by moving our programs forward and serving our school’s mission.”
Jeff Zajac, Assistant Head of School, commented “We are truly excited for the breadth of experience and knowledge that Mr. Mike Watson brings to our school community and our athletics department.  We felt that way before he started work in July and even more so now that he’s begun building relationships with Marian stakeholders. Mike has proven to be an excellent fit for the goals of our Mission and Vision for our students.  We couldn’t be happier that Mike has joined the Marian Community and look forward to many years of victories both on the athletic fields and in the hearts of our Mustangs.”
Welcome, Mr. Watson!
Back