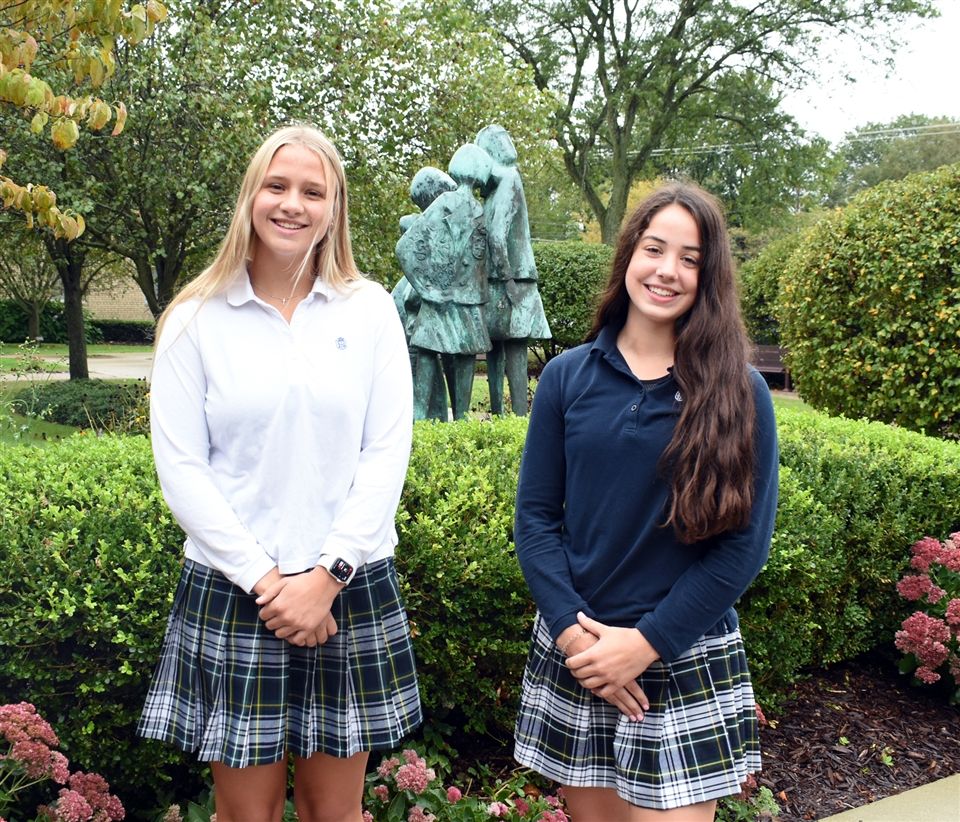 9/28/2021
Marian High School seniors Lauren Holt '22 and Meghan Sharkey '22, have been named Commended Students in the 2022 National Merit Scholarship Program based on their scores on the 2020 Preliminary SAT/National Merit Scholarship Test (PSAT/NMSQT). Lauren and Meghan are two of the 34,000 commended students throughout the nation who are recognized for their exceptional academic promise. Some of these students become candidates for Special Scholarships sponsored by corporations and businesses. Commended Honorees placed among the top 50,000 scorers of the more than 1.5 million students that entered the 2022 competition.
Lauren, daughter of Karen and Brian Holt of Rochester, has been active in various clubs at Marian. She was selected for the Archdiocese of Detroit All-Catholic Academic Teams for 2018, 2019, 2020, and 2021. Lauren is a member of the National Honor Society and Spanish Honor Society. She received the Bausch and Lomb Honorary Science Award. Lauren received first honors on Marian’s honor rolls every semester and has received AP Physics, Honors Chemistry, Honors Geometry, and Religion Departmental Awards. She is also a member of the Marian Medical and Ambassador clubs.
Lauren is also an accomplished gymnast and is a coach at the Gymnastics Training Center of Rochester. She was awarded Gymnast of the Year in both 2019 and 2020. She is a level 10 since 2017 and competed at the Women’s Gymnastics Junior Olympic National Championships in May 2019.
Meghan, daughter of Patricia and Daniel Sharkey of Troy, has also been active in various clubs and activities at Marian. She was selected for the Archdiocese of Detroit All-Catholic Academic Team in her Sophomore year. She is currently the president of the Marian Life Club, the Co-founder and President of the Disaster Relief Club, a member of the Medical Club, and a participant with the Liturgical choir and Marian Melodies.  She is also a member of the Cantors at St. Hugo of the Hills Parish. Meghan has earned first honors on Marian’s honor rolls every semester and has received Achievement Awards in Biology, Honors English, and Honors Precalculus.  She has also been honored with awards from the Vocal Arts Department. Meghan is the recipient of the Samyn Akao Science Scholarship and was awarded a Marian General Scholarship for her academic performance. She has also served as the PR Historian for the Class of 2022 while here at Marian.
Meghan was the Junior Varsity Tennis Captain in 2019 and a member of the tennis team for all four years.
Back