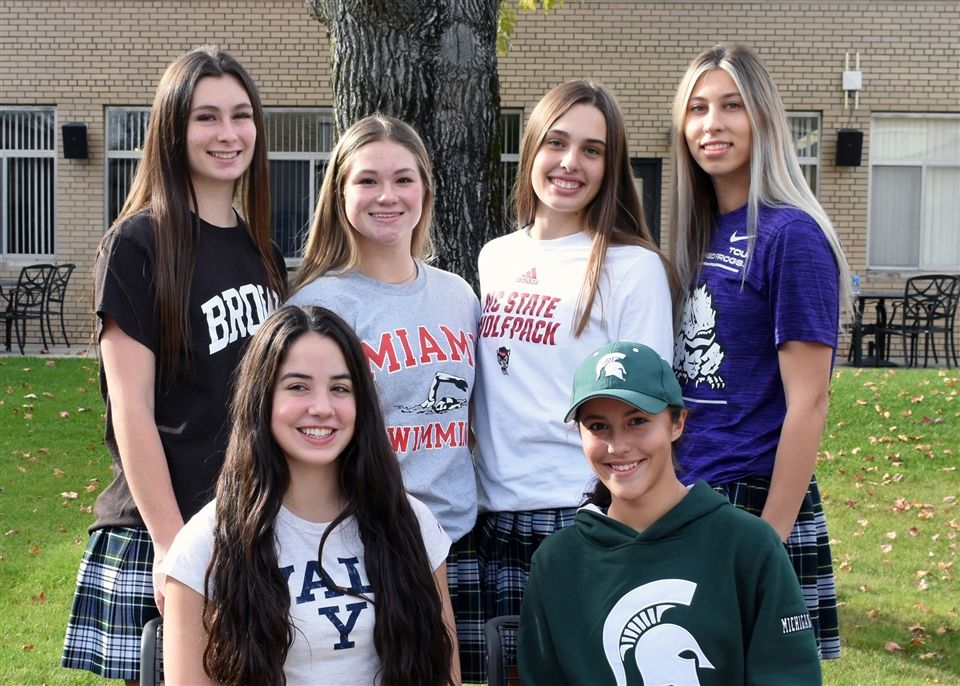 “Isa” Agrusso, daughter of Michael and Lizbet Agrusso of Clinton Township, is considered one of the top defenders in Michigan among the 2022 class. Agrusso will be a four-year varsity member of the Marian soccer program and is a standout in the Nationals club program. Named to the TopDrawer Soccer “Best XI” from last spring’s girls academy event at IMG Academy in Florida, Agrusso has also helped lead Marian to two MHSAA soccer championships (2019, 2021).

The Marian cross country and track programs have also benefitted from Agrusso’s talents. Isa has been named all-region in both sports. Pulling double-duty in the spring, Agrusso has also been named CHSL all-Catholic seven times prior to her senior track season. “Being a varsity athlete has prepared me for the time commitment and discipline required for the next level,” Agrusso stated. She is undecided on her course of study, but plans to continue sharpening her defensive skills for head coach Jeff Hosler’s Spartans.

Ava Brizard will be remembered as one of the most decorated players in the illustrious history of Marian volleyball.  The daughter of Julie and Brian Brizard of Novi, Ava fell in love with NC State after visiting the campus and speaking with the coaching staff, including head coach Luka Slabe. With talent like Brizard’s, the sentiment was certainly mutual. Not only is she a standout on the court, but in the classroom as well. Ava has earned multiple departmental academic awards at Marian and is a two-time scholastic all-Catholic selection.
Ava, who hopes to study business, has served as a three-year varsity captain at Marian, earning all-state status on her way to helping lead the Mustangs to the 2020 MHSAA Championship. Through her play on the club circuit and as a prep athlete a year ago, Brizard was selected to the 2020 Prep Volleyball all-American team and was named the 2020 PrepDig Michigan Player of the Year. She was also honored as the 2020 Gatorade Michigan Player of the Year.

Brizard recently surpassed 2,000 career kills at Marian, has been named an AAU All-American and is a finalist for the 2021 MIVCA “Miss Volleyball” Award. She is the consensus top-ranked Michigan player among the 2022 class.
The Mustangs are currently in the MHSAA regional tournament in pursuit of a second straight MHSAA title. “Marian has helped me love the game even more that I did before attending here,” Brizard said. “I’ve gotten to play alongside some of the best players in the state and be coached by volleyball geniuses that have helped me grow and develop my game.”

While not an interscholastic competitor, Lauren Holt has risen to the top of the gymnastics world and will continue her academic and athletic career at Yale University in New Haven, Connecticut. Holt competes with the Gymnastics Training Center (GTC) of Rochester where she resides with parents Brian and Karen Holt.
In 2019, Holt finished seventh in the nation on the floor exercise. She has also medaled in a number of regional, state and invitational meets. While Holt hopes to enter a pre-medicine academic program while competing for the Bulldogs, she has also been active in the community. Holt co-founded Charlotte’s Wings Youth Council. The charity collects books for children battling serious illnesses across the state of Michigan. Since 2008, over 120,000 books have been donated.

Holt is a member of National Honor Society and a senior retreat leader at Marian. She is also an officer on several Marian club organizations and serves on the school honor code committee.
“I’m so thankful for the Marian teachers who have accommodated my gymnastics travel schedule,” Holt said. “I couldn’t have done it without them these past four years!”

A multi-sport student-athlete, Sarah Sylvester will take her volleyball talents to Fort Worth, Texas next autumn and hopes to study political science at Texas Christian University of the Big 12 Conference.
It was a toss-up for quite some time as to whether Sylvester would pursue basketball or volleyball at the collegiate level. The 6’3” center earned CHSL all-league honors over the past three seasons for Mary Cicerone’s Marian basketball squads. In addition, Sarah was a BCAM all-state honorable mention list member after the 2018-19 and 2019-20 seasons.

As a middle blocker, Sylvester has thrived under Coach Mayssa Cook’s direction. All-league and MIVCA all-state second team as a junior, Sylvester anchored the Mustangs to a MHSAA championship in 2020. This season, Sylvester was named all-Catholic and is one of ten finalists for the MIVCA “Miss Volleyball” award.
The 4.0 GPA student is a member of the Marian Disaster Relief Club, National Honor Society and competes for MiElite (volleyball) and Michigan Storm (basketball) on the AAU circuits. She resides in Livonia and is the daughter of Marie and Robert Sylvester. For Sarah, the opportunity to simply play has been crucial in her development. “Just playing sports at the varsity level here at Marian has made me better,” she said. “Playing with and against the top players in the state has prepared me for this opportunity.”

Outside hitter Sophie Treder of Northville has been a member of the Marian varsity volleyball team since her freshman year and has grown to be an outstanding student and a gifted athlete. She has committed to join head coach Ahen Kim’s Brown Bears of the Ivy League in the fall of 2022.

While a student at Marian, Sophie has been active in Project Care, National Honor Society, Ambassador Club and Oakland Hope. She trains with Barwis Methods and is a member of the MiElite Volleyball Club.

While competing for Marian, Treder was a key member of the 2020 MHSAA championship squad. Sophie earned all-Catholic, MIVCA all-region and MIVCA all-state honorable mention a season ago. This year, she has already earned CHSL all-league status and is an all-state candidate. She was named to the AVCA National Phenom list each of her four high school seasons and is a 2021 AVCA all-America watchlist member. As a club player, Sophie was named to the JVA Watchlist from 2018-21. “This group of girls is very special to me for so many reasons,” Sophie explained. “We love each other, yet we push each other to be better. We know when to have fun and when to focus.”

While Waechter is a sprinter at heart, she’s competed in numerous events and relays to help power coach Bill Thompson’s Marian squad – a team that finished third at the 2021 MHSAA Division 3 Final. Julia has qualified for MHSAA finals each of her four years as a Mustang, swimming in the 50 yard and 100 yard freestyle each year. She advanced to the A-final of the 50 free each of her first three seasons, placing fourth at both the 2019 and 2020 finals. Waechter hopes to improve on last year’s third place finish at this year’s finals on November 20. Over the past two seasons, Julia has also advanced to the final of the MHSAA championship in the 100 free. In 2019, she finished fifth and a year ago, she finished fourth. Prior to 2021 finals, she has earned MISCA all-state honors five times. The daughter of Jennifer and Adam Waechter of Beverly Hills, Julia has been active in Marian clubs, volunteerism and has earned all-Oakland County, all-Catholic and CHSL all-Academic status on multiple occasions.

“Growing up, I never had the option to swim for a school team,” Waechter said. “Without Marian swim and dive, I wouldn’t be where I am today and I couldn’t be more grateful for the teams I’ve been a part of here.”

For veteran Marian athletic administrator Mike Watson, this is one of the most outstanding signing classes he’s witnessed. “While this is my first year at Marian, I’ve led some of the most outstanding athletic programs in Michigan and this group of signees is as talented as I’ve ever seen,” Watson said. “There are more student-athletes that will only add to this tremendous class, but more important than the athletic accolades, these young women are going to attend some of the finest universities in the world. The light of our mission shines through them today, but it will shine most in several years when we witness the impact they’ve made.”
The recruiting process continues for several Marian senior student-athletes. Future signing day celebrations have been planned on February 10, 2022 (NCAA Division I and II) and also May 4, 2022 (NCAA I, II, III, NAIA, NJCAA, USCAA) for those who are yet to make a final commitment.
Back