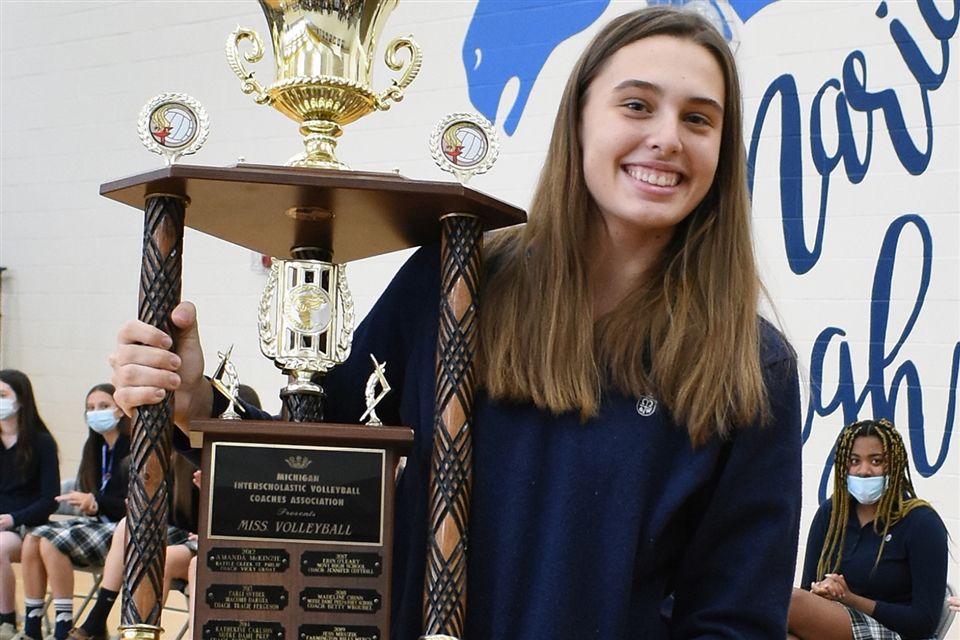 12/15/2021
Marian High School Senior Ava Brizard was named 2021 Miss Volleyball by the Michigan Interscholastic Volleyball Coaches Association (MIVCA). The award is given to the top volleyball player in the state. Ava is the second Miss Volleyball from Marian, joining Alex Cocklin (2009). Brizard, an outside hitter, holds the Marian school records for attacks and kills in a season and in a career.  Ava was recognized at a school ceremony where she received a trophy that will be on display at Marian for the next year.
Also recognized at the ceremony was fellow Mustang and nominee, senior Sarah Sylvester (Livonia). Sylvester, a middle blocker, finished eighth in the statewide voting. Marian was one of only two schools to have two finalists for the prestigious award.
Athletic Director Mike Watson said, “Ava is incessantly positive. She sets the tone for the entire team.  Whether it’s her enthusiasm for working with young players at summer camp, or going the extra mile for her teammates. Ava is a leader in every sense of the word and in the rare moments when she isn’t playing her best, she rallies everyone around her with positivity and enthusiasm. She is the ideal teammate.”
Marian also boasts several student-athletes who were named state players of the year. Honors include Miss Basketball in 1998, Miss Soccer in 2004, Miss Dance in 2008, Miss Volleyball in 2009, Miss Tennis in 2013 and 2018, Miss Ski in 2018 and Miss Golf in 2020.
Ava Brizard will be remembered as one of the most decorated players in the illustrious history of Marian volleyball.  The daughter of Julie and Brian Brizard of Novi, Ava will be attending North Carolina State University next fall where she will continue her academic and athletic career. Ava fell in love with NC State after visiting the campus and speaking with the coaching staff, including head coach Luka Slabe. With talent like Brizard’s, the sentiment was certainly mutual. Not only is Brizard a standout on the court, but in the classroom as well. Ava has earned multiple departmental academic awards at Marian and is a two-time scholastic all-Catholic selection.
Ava, who hopes to study business, has served as a three-year varsity captain at Marian, twice earning all-state status on her way to helping lead the Mustangs to back-to-back MHSAA championships in 2020 and 2021. Through her play on the club circuit and as a prep athlete a year ago, Brizard was selected to the 2020 Prep Volleyball all-American team and was named the 2020 PrepDig Michigan Player of the Year. She was also honored as the 2020 Gatorade Michigan Player of the Year.
Brizard has been named an AAU All-American, is the consensus top-ranked Michigan player among the 2022 class and was recently named to the American Volleyball Coaches Association (AVCA) all-America first team.
“Marian has helped me love the game even more that I did before attending here,” Brizard said to the student body at an all-school assembly. “I’ve gotten to play alongside some of the best players in the state and be coached by volleyball geniuses that have helped me grow and develop my game.”
Back