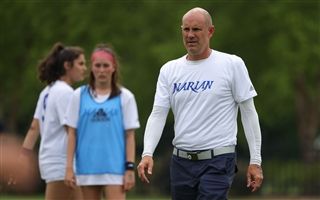 Marian has named Reid Friedrichs as the next head varsity coach of the Mustangs soccer program that has won the last four state championship titles. The announcement was made by Marian Athletic Director Mike Watson, following the retirement of legendary coach Barry Brodsky who led the Mustangs to nine state titles in his 20 seasons with the program.
“Reid has been a big part of our success in recent years,” said Marian Athletic Director Mike Watson. “He has earned the trust of our student-athletes and families and has all the tools to make our outstanding soccer program even stronger in the future. My experience with Reid has shown me that he has very high expectations, yet is very patient and focused on constant performance improvement on the field and in the classroom.”
For the last four seasons, Friedrichs has been an assistant coach at Marian, following coaching stints at Livonia Churchill (boys and girls) and Warren De La Salle. In addition to high school, his coaching experience includes club (Liverpool FC, Vardar SC), the Olympic Development Program (ODP), college (Alma College), and the semi-pro level (Michigan Bucks, now Flint City Bucks).
“I am honored and excited to continue the traditions and excellence that this school and program has shown not only in the last four years since I have been here but in the previous 20 under Barry Brodsky and even back to when my mother [Kathleen McPhail Friedrichs,’65] was here in the third graduating class ever at Marian,” said Friedrichs. “The amazing people before us created legacies and traditions of success on the field, in the classroom, and as great human beings in service. This has given us the platform to continue and honor all we can with our academic successes, high level of play and effort, and overall integrity as people. And we intend to do that.”
As a player, he earned several honors for his goalkeeping and was nominated to the All-State team while a student-athlete at Ann Arbor Pioneer High School. He continued his playing career as the starting goalkeeper for Michigan State University (MSU), where he was selected Big Ten Player of the Year and MSU Athlete of the Year in 1996.
Friedrichs inherits a powerful Mustangs team ranked third in the Michigan High School Athletic Association (MHSAA) with nine state titles and 12 finals appearances. The Mustangs are ranked second in consecutive titles, having secured the last four MHSAA titles (2017, 2018, 2019, 2021)*. They are three-time undefeated champions (2018, 2017, 2004).
Marian defends their title when they open the 2022 campaign on March 31 at Mercy with a 6 P.M. kick-off. Last season the Mustangs were 2-0-1 against the Marlins.
Follow Mustangs soccer on Twitter (@MarianSoccer) and Instagram (@MarianVarsitySoccer) or check Marian’s website www.marian-hs.org under the “Athletics” tab.
*2020 canceled due to COVID
Back