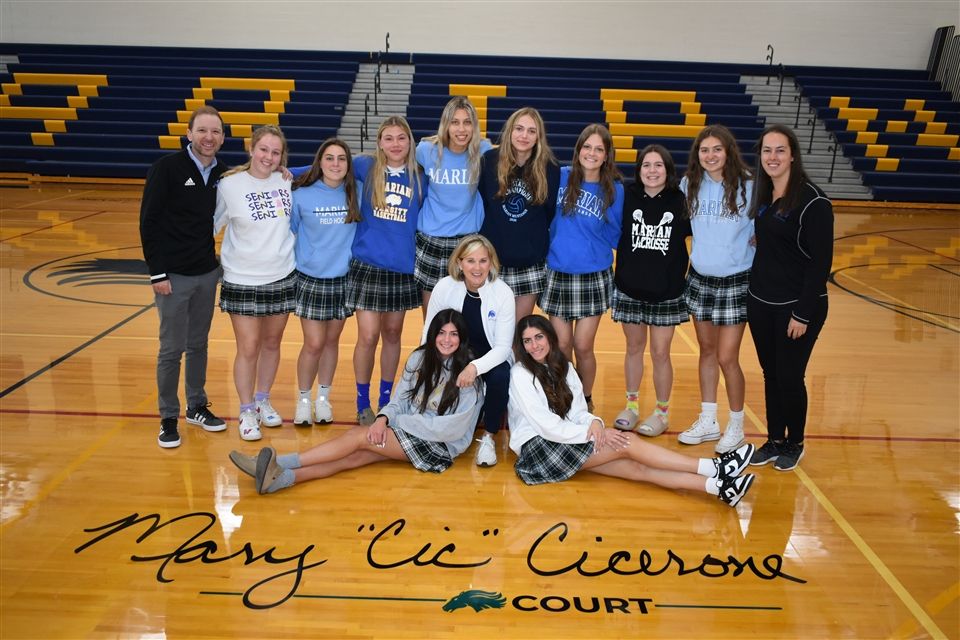 5/6/2022
In a ceremony in front of the students, faculty, and staff, Marian renamed their basketball court after retiring varsity head coach, Mary Cicerone, the winningest female basketball coach in state history with 707 victories. The newly minted Mary “Cic” Cicerone Court, was named to honor the retiring coach after 39 years as an educator and coach at the school.  The ceremony capped off a week that began with Cicerone’s induction into the Marian Hall of Fame on May 1st.

Her illustrious career will go down in basketball annals as legendary. As a Marian teacher and coach throughout her entire career, Cicerone has garnered more epithets, and her immeasurable impact on the Marian student-athletes both on and off the court will be forever lasting.
“Mary’s dedication and commitment to Marian as an educator and coach has enriched the lives of many young women,” said Sr. Lenore M. Pochelski, IHM, Head of School, Marian High School.  “She has set a high standard of excellence and self-awareness for her students and athletes to ensure their successes. Her willingness to put their victories ahead of her own will be her legacy.”

Under her tutelage, the Mustangs appeared in seven state championships, winning six titles (1988, 1992, 1996, 1998, 2014, 2015), which ties Marian for 5th all-time in appearances in the Michigan State Athletic Association (MHSAA) finals.  Her student-athletes have gone on to earn academic and athletic scholarships.  Inspired by her work ethos, other former student-athletes have gone into the basketball coaching ranks.

"It’s hard to put into words how Mary Cicerone can bring out the potential a player doesn’t even know they have," said former player and Cicerone’s successor as varsity head coach Michelle Lindsey '09.  "From being coached by Mary for four years, to coaching alongside her for nine, I have seen and heard the dedication she has put into her legacy.  She has shown me what an honor it is to impact these kids’ lives in such a big way."

Cicerone’s 707 victories place her third among all-girls basketball coaches and fifth among all-boys or girls basketball coaches combined. Cicerone’s teams averaged 18 wins per year under her leadership. Her storied career will forever be encapsulated by accolades and honors, including those by her peers when she was inducted into the 2017 Hall of Fame class for the Basketball Coaches Association of Michigan.  She was named Coach of the Year by the Michigan High School Athletic Association five times (1988, 1992, 1996, 1998). In 2014, Cicerone was named Coach of the Year by the Michigan High School Basketball Association.  The Detroit Catholic High School League (CHSL) named her the 2009 Person of the Year.  However, she holds a unique distinction in the CHSL's Hall of Fame (HoF) as an inductee in the class of 1998 and the mother of an inductee, Anina (Nina) Cicerone Carder '09, HoF class of 2013, for her accomplishments as a Forward on Marian's state champion soccer team.
A native of Coopersville, MI, Cicerone’s dedication on the hardwood as a player would lead to a spot on the 1977 All-State team representing her alma mater (class of 1978), Coopersville High School.  Following high school, she went on to have a brilliant career as an All-State player in her junior and senior years at the University of Detroit Mercy (U-D), where she led the Titans to three AIAW state championships.  She won the 1982 President's Award as U-D's most outstanding female student-athlete and scored 1,035 career points.  She was inducted into the U-D Hall of Fame in 2007.
There's no doubt Cicerone has left a permanent impression as an educator in the classroom and on girls high school basketball.  An impression that was made possible largely by the support of her husband, David, daughter Nina, and son, Russell, a professional soccer player for the United Soccer League Championship Pittsburgh Riverhounds.
“Marian has been a great place to work and coach the past 39 years," said Mary. "I will take with me many special memories as a teacher and coach. I appreciate my dedicated colleagues, my present and former students, and the talented athletes I have had the pleasure to work with. I also want to thank my husband, David, who has supported the time and effort I have given to coaching.”
Back