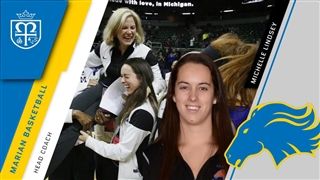 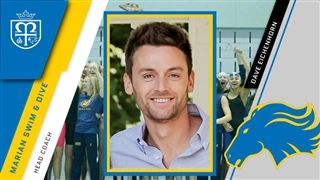 6/2/2022
Michelle Lindsey ’09 and Dave Eichenhorn were named head varsity coaches of the Mustangs varsity basketball and swimming and diving program, respectively.  They replace two legendary coaches who announced their retirement earlier in the year.
Michele follows in the footsteps of her mentor and former head coach, Mary Cicerone, who led the Mustangs to six state titles in her 39 seasons with the program.  Michele has been an assistant varsity coach at Marian for the last 10 seasons and spent three seasons as a head freshman coach. She is the co-director of the school’s summer basketball camp where she started as a camp counselor while a student-athlete at Marian in 2008. Her love of the sport is evident in her involvement in various development and camp programs including the University of Michigan, Nike McCracken Camp at Adrian College, and Ferris State University Elite Camp. She also spent three seasons as an AAU coach.
After graduating from Marian in 2009, Michele played for Hillsdale College and Madonna University. While playing for Madonna, she was a two-year captain and was named “Newcomer of the Year” for the Wolverine-Hoosier Athletic Conference, graduating with her degree in nursing.  As a player at Marian, she was a captain for two seasons, earning All-Catholic League (2008, 2009), All-Oakland County 1st Team (2009), All-State 4th Team (2008), All-State 2nd Team (2009), and Basketball Coaches Association of Michigan All-Star Selection.
Dave, who takes over for legendary coach, Bill Thompson, was Detroit Country Day’s boys head varsity coach for swimming and diving since 2019 while simultaneously acting as the assistant coach for the girls program at the school who won back-to-back conference championships in 2019 and 2020. The boys team improved in his time there finishing the MHSAA Division 3 State Championships in 11th place.
Along with Country Day, Dave has been the head swim coach at Pine Lake Country Club, directing a program of more than 200 athletes who set 41 club records and six league records. His team also won the league championship in 2008 and 2016. He has also lead or assisted the swim teams at Beechview Swim and Tennis Club, Birmingham Groves High School, Tweak Athletic Edge, Motor City Aquatics and Birmingham Bloomfield Atlantis.
He is a graduate of the University of Michigan with a Bachelor of General Studies.
Back