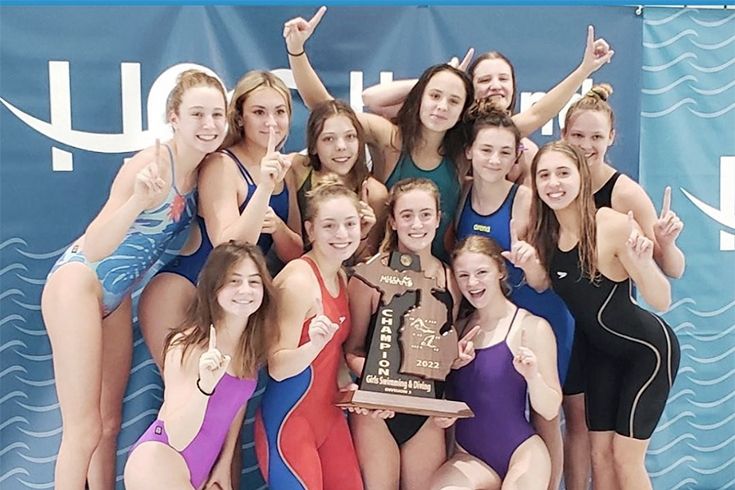 11/21/2022
Swim & Dive captures fourth state title, first since 2014
Volleyball makes it a 3-peat
Bloomfield Hills, MI (November 19, 2022) Marian volleyball, and the swim & dive team came back to school from the west side of the state on Monday as state champions.
The volleyball team (49-1), led by Miss Volleyball finalists and seniors Ava Sarafa and Ella Schomer, secured its third consecutive state championship after defeating Northville at the Division 1 volleyball state championship at Kellogg Arena in Battle Creek, 22-25, 25-22, 25-22, 25-11.
Marian’s only loss this season came at the hands of Northville, who picked up where they left off by taking the first set.  But Marian, under the guidance of head coach Maysa Cook, rose to the challenge with standout performances from players like sophomore Izzy Busignani who tallied 20 digs, two blocks and 27 of Marian’s 57 kills, including the final five points of their fourth set to avenge their only season loss and to defend their third-straight title.
From the hardwood to the pool, the Mustangs swim and dive team, led by senior Rachel Bello, held off Holland Christian with a score of 245 points to bring home the school’s fourth state championship in swim and dive and its first since 2014. Under first-year head coach Dave Eichenhorn, swimmers also won state titles in four individual events at the Holland Aquatic Center:
*school record
Bello’s dominate performance earned her the honors of Finals Swimmer of the Meet, the second straight year a Marian has been bestowed the award.  Several Mustangs earned All-State honors including: Low (50 freestyle), Becharas (200 individual medley), McKenney 100 and 200 freestyle), and Grace Morgan (diving).
Back